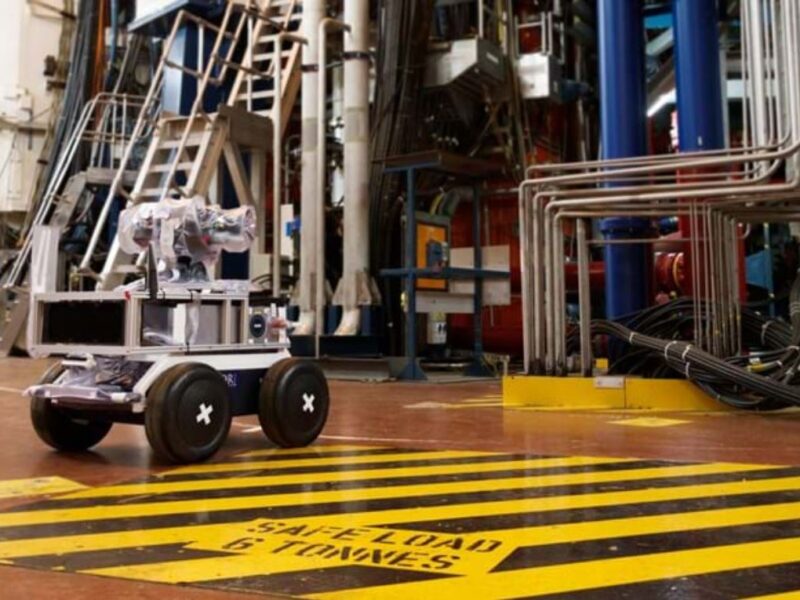 This was a world first! – use of an autonomous robot within a working fusion reactor!​

In May 2021, the ORI had a major field trial at JET (the Joint European Torus), at the UKAEA site in Culham. The trial involved the remote operation of a customised Clearpath Husky ground robot in the JET Torus Hall. The trial involved the robot entering this nuclear environment, scanning for radiation at fixed locations, and returning to base hours later.

The Husky base was heavily modified, including the batteries to power it for the extended mission, and the addition of an omnidirectional sodium-iodide radiation detector. The base was then covered in a custom plastic wrapping to protect it from tritium gas and beryllium dust in the environment.

A pan-tilt unit mounted on the base carried the multiple cameras necessary to provide situation awareness for steering the vehicle. The pan-tilt unit also carried a cerium-bromide detector with 3.8kg collimator to directionally detect radiation, as well as a 2D lidar to generate a point-cloud map of the environment.

The mission itself was straightforward, an operator drove the robot into position using a remote operator interface. It was then parked, and the operator triggered a scan of the environment.

After collecting the initial point cloud of the environment, the robot moves its PTU to position the collimated detector to detect radiation in different directions.  These measurements are then used to ‘paint’ the point-cloud, generating a slowly improving map of radioactive activity within the area.

As the process is fully automated and no human is in harm’s way, the robot is able to scan for hours at a time, significantly improving the scan’s sensitivity.

After the scanning was finished, the robot was tele-operated back to the starting point where it could be charged for the next scan.

This trial is one of the many activities happening as part of the RAIN Hub which demonstrate the value of robotics to the nuclear industry, paving the way for future robots to operate safely in environments that would otherwise be too dangerous for humans.

We thank UKAEA, JET and RACE for hosting us; the RAIN Hub, NNUF, UKRI and EPSRC for making the project possible; the engineers and researchers from Oxford and Lancaster University who’ve worked hard to make it a reality.